What is a Trait Theory?

A trait theory understands personality much as personality is talked about in day-to-day life: a set of personal characteristics or qualities that determines the different ways we behave in different situations.

Trait theory has its origins in Ancient Greece and the work of the Greek physician Galen (2nd Century AD).

Subsequent biological investigations (many centuries later) have disproved the humoral theory, but trait theories still exist in different forms, seeking categories by which to measure and classify people.

The key assumptions of a trait theory are:

Trait theories are an idiographic approach to personality. Most trait theories suggest a set of traits that are fairly stable and consistent across time and space, though some theorists have considered the possibility that traits may be adaptable.

Click to be redirected for our detailed overview of the Eysenck Theory of Personality (Three Factor Model).

The Origins of Contemporary Trait Theory

Gordon Allport was one of the first psychologists to search for a set of basic personality traits. In 19361, he started his search by identifying all the words in a dictionary that described aspects of personality.

Allport found around 18,000 words, which he subsequently analysed and reduced down to those words which referred to stable personality characteristics, rather than temporary states (such as ‘flustered’) or evaluations of others (such as ‘admirable’). At this stage, Allport was still left with 4,000 words referring to stable personality characteristics. Allport next set about grouping words into blocks of synonyms.

Depending on how you group the synonyms, you would achieve between 3 to 16 personality traits using Allport’s methodology. 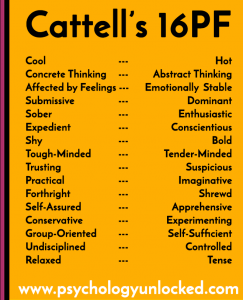 In his own writing, Cattell referred to these sixteen factors as ‘source traits’. He termed groups of similar types of observable behaviour ‘surface traits’. Surface traits (such as kindness or friendliness) are assumed to stem from a deeply rooted source trait, which lies at the core of an individual’s personality.